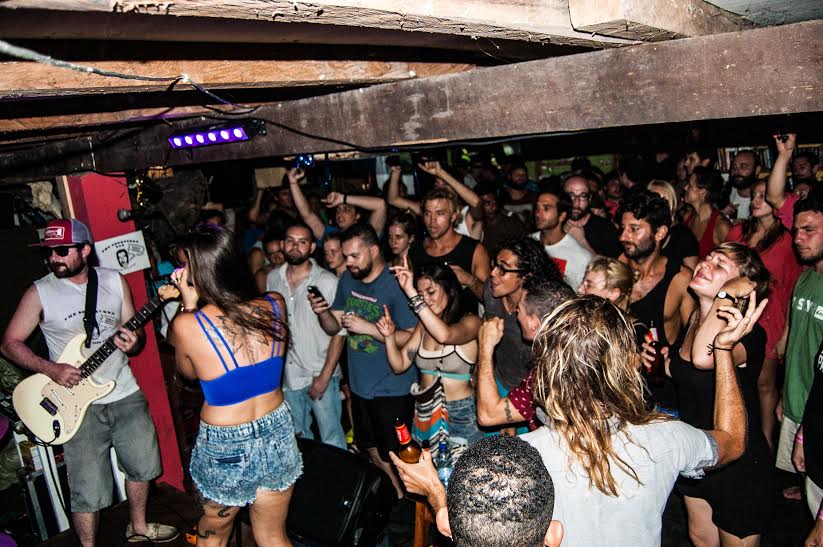 If you’re looking for a list of the best bars in Bocas del Toro, look no further. Make sure to pencil in one (or all) of these spots when you’re feeling boozy or just looking for some fun and interesting spots to throw back a cold one. Things rarely go as planned on this shiny little island in the Caribbean, but if you hear someone mention any of these spots – hop on board quickly and prepare to have fun. 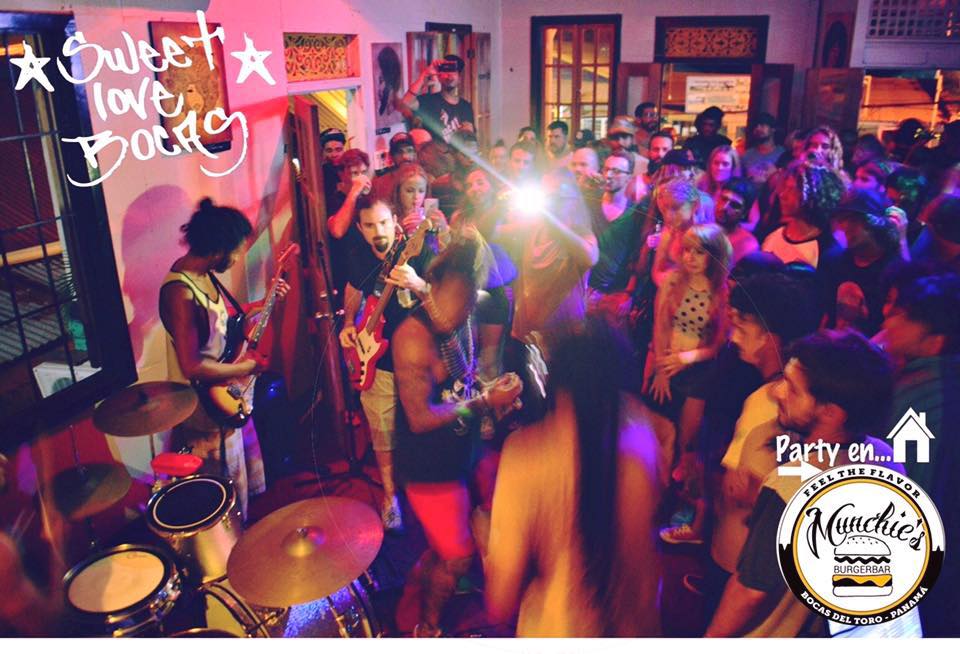 Located directly across the street from La Iguana is Munchie’s Burger Bar. Aside from having some of the most mouth watering food available in all of Panama (and perhaps the world) – this burger spot recently upgraded to a larger venue with an amazing vibe & view and now hosts parties along with the staple menu items. Robert & Cristina are the young owners and add much character to the scene. They often have live music and invite local bands as well as traveling acts to play. This is a consistent local hangout spot and in BDT that means it’s a good vibe and good value. Don’t miss Munchie’s Burger Bar on your trip, it’s 100% one of the best bars in Bocas.

The Bookstore Bar aka Loco Dave’s

Loco Dave is the owner of this bookstore-turned-bar – and it’s perhaps the most interesting bar on the planet. Hosting off-the-wall themed parties (a la “Don’t Taze Me Bro” – get tazered and get a free Jaeger shot) and some of the most interesting and unique people around. Not to mention – a great venue for live music on certain days of the week. Think you’ve got ping pong game? The house table at Bookstore Bar is where unnamed locals seem to consistently destroy even the most confident challengers. There is a Nintendo 64 and Super Nintendo for those inclined to a Mario Kart battle, and the inside/outside setup of the bar feels eerily reminiscent of “drinking on the street” (which is a national pastime where I come from). Play giant Jenga outside or pick up one of the old books lining the walls and get lost in a saucy love story for a few minutes. Just make sure to use the restroom BEFORE you drop by. 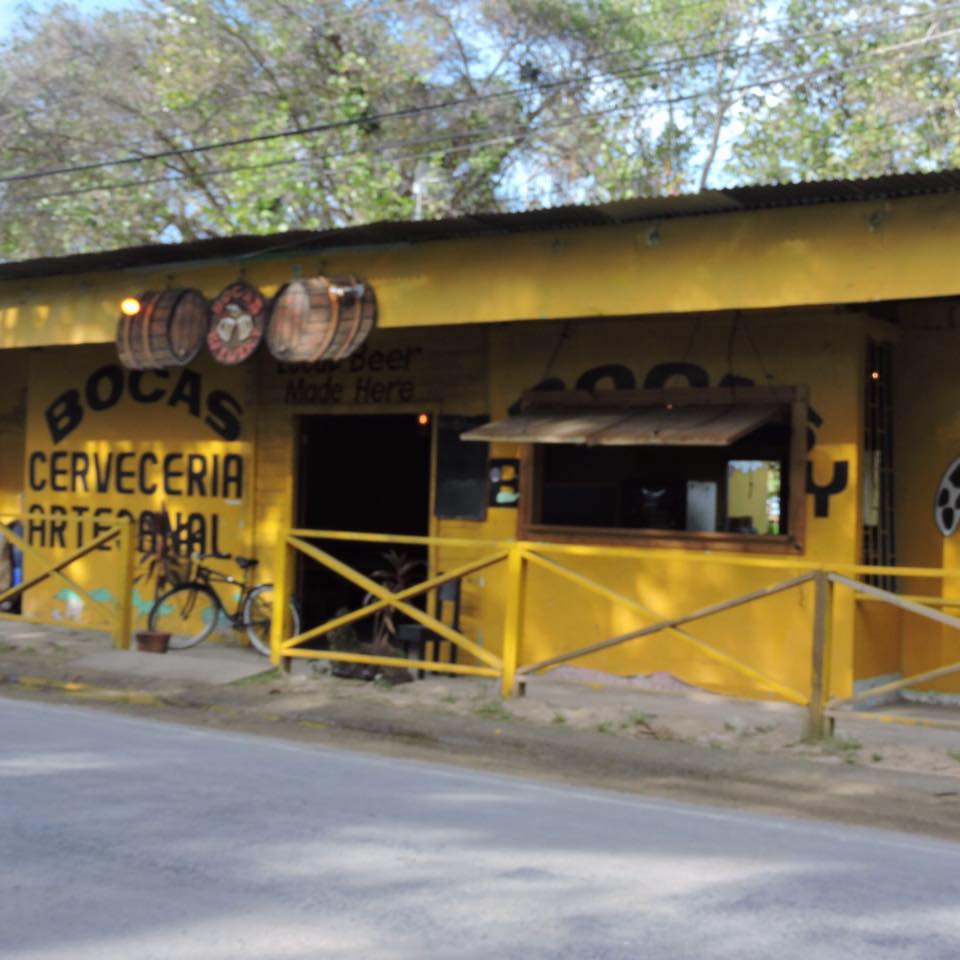 Finally! Craft beer comes to Panama and Bocas del Toro! Like something out of a dream, Bocas’s one and only microbrewery is located directly on the beach, just a 5 minute walk from the heart of town. Come and chill out here if you want a break from Panama’s very similar domestic beer choices and escape the hustle and bustle of Bocas town. This awesome couple from Seattle solved a very serious beer problem on Isla Colon and we totally love this spot. They have their own brews as well as several rotating taps from other breweries in Panama City as well as a small kitchen serving up food that, well, pairs great with great tasting beer. Support Bocas Brewery!

Just a $1 taxi ride from Bocas Town, Aqua Lounge hosts the most legendary Sunday and Wednesday night parties in the history of Wednesdays. This hostel and bar sits entirely on top of the water and offers a 270 degree panoramic vista of Isla Colon. The vibe is impeccable and the music is always on point. During the daytime, relax on the massive deck space and dip at your leisure. Catch the sunset and watch the water taxis or stay until evening but tread carefully! You’re may end up on the long list of those “accidentally tackled into the water” by your best friend whose had one too many shots.

La Iguana Surf Bar is known for having some of the best parties in Bocas del Toro and has a consistent wild vibe on almost every night of the week. The crowd is an even mix of locals and tourists which makes the experience interesting and different from regular ex-pat bars. There is an elevated stage with a DJ booth which could be pulsating with dancing Argentinian babes, sketchy locals or tequila-hammered bros at any given moment. Oh yeah, the $1 tequila shots are probably what makes this party so consistent. The outdoor back deck is built on stilts above the water and is a more chill (but still loud) hangout compared to the raucous inside. The all-female bartender roster a.k.a. the “Iguana Girls” are recruited throughout the year and are usually an elite sample of the area’s best and brightest. Sip a beer with your toes dangling in the Caribbean or wild out on stage at this legendary Bocas night club. 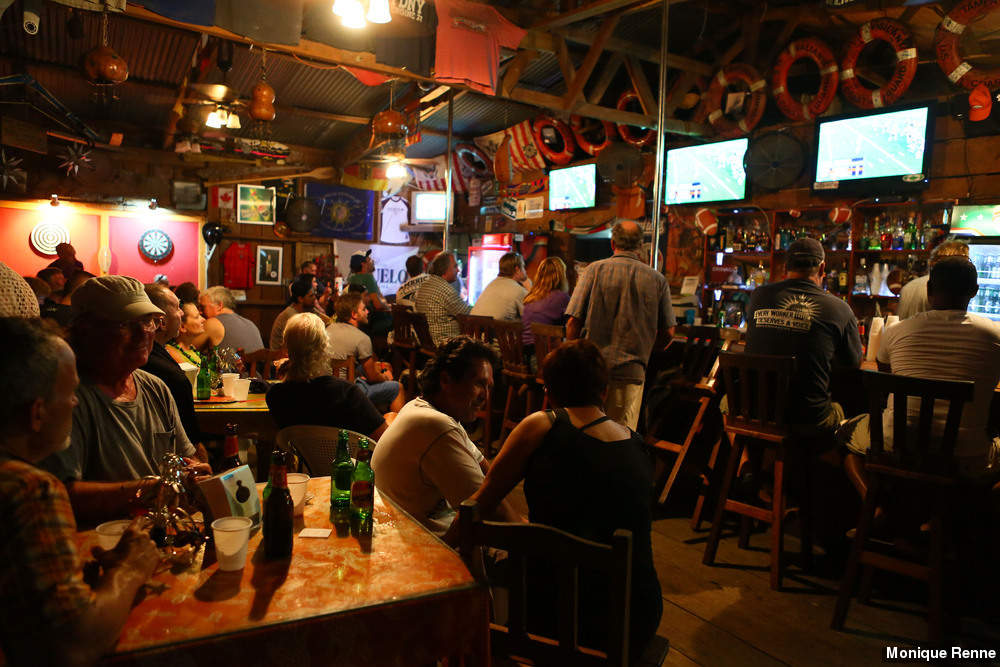 If you’re looking for a sports bar type of atmosphere or you’re hoping to catch a live game somewhere, Toro Loco is the spot. They’ve got a full kitchen with pub food and full bar, and an inside/outside atmosphere that stays pretty lively (somewhat depending on what sport is happening at what time). If there’s a live Pay Per View fight it will surely be playing on one of the many TV’s at Toro Loco.

If you want a taste of something local, stop by Barco Hundido for a taste of reggaeton and dancehall. This bar always attracts an interesting crowd, and if you’re in the mood for the unusual, this bar should be on your list. There’s a maze of plants and bridges and stairs and pools of water and a circular swimming pool shaped outer deck, but be careful diving into the water here, it’s actually built over the wreck of a sunken ship. Many have emerged with brand new face tattoos after disregarding the dimly lit and poorly written sign on the outside deck reading “EVERYTHING CUT YOU!”

arties (a la “Don’t Taze Me Bro” – get tazered and get a free Jaeger shot) and some of the most interesting and unique people around. There is a ping pong table where unnamed locals seem to consistently destroy even the most confident challengers. There is a Nintendo 64 and Super Nintendo fo